Workhorses of the environment

Conservation Montgomery’s Big Tree Tours, which educate residents on the importance of tree stewardship, are wildly popular. Held in the spring and fall, the tours are guided by the legendary Joe Howard, founder of Montgomery County Big Tree Registry and a member of the county’s Forestry Advisory Board.

The tour celebrates champion trees — the largest known tree of a given species in a particular geographic area. Montgomery County is home to the Maryland State Champion tree — an American sycamore that is more than eight feet in diameter. While every tree we visit is not a designated “champion,” all are among the largest trees of their species in the area. And Howard’s enchanting narrative on each tree is not to be missed.

Prior to the pandemic, Conservation Montgomery chartered a bus to transport about 25 people around the county for each Big Tree Tour. But current  pandemic protocols require attendees to drive in separate vehicles and meet at the starting point for each event. Because there is no transportation cost involved, there is no charge for Big Tree Tours during the pandemic. We hope to return to using a tourbus again soon.

Reservations are required for our Big Tree Tours, and the event is typically filled the same day a notice is distributed to our email list. To receive Big Tree Tour notifications and make reservations for future tours, click here. 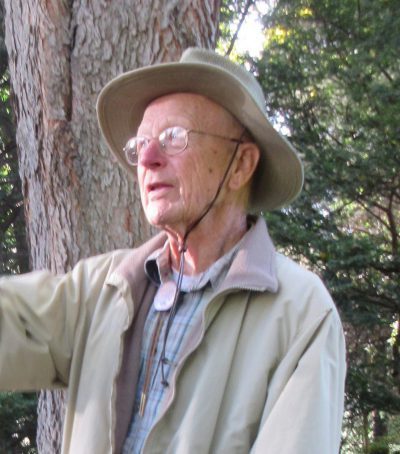 Joe Howard’s love affair with stately trees began when he was a child in the 1930s. Back then, his family would pile in the car on occasional Sundays to visit Eastern Shore attractions, including the majestic Wye Oak. It was the nation’s largest white oak and the State Tree of Maryland from 1941 until its demise in 2002. (Wye Oak State Park preserves the site where the revered tree stood for more than 400 years in the town of Wye Mills.)

In the 1950s, Howard, then a teacher and principal, regularly took students to visit the tree, along with other magnificent native species. A few years later, as a principal in Montgomery County, Howard launched an outdoor education program that quickly spread to nearly a dozen local schools.

Thereafter, Howard turned his attention to teaching all county residents about the importance of trees. Montgomery County is unique, says Howard, in that it leads the state in “champion” trees. As president of the county’s Forestry Advisory Board, Howard started a contest to find our region’s biggest trees. Identifying “champion” trees is important, says Howard, because recognizing and celebrating them may help prevent them from being cut down for development. The board publishes a biannual Register of Champion trees to keep track of our largest specimens.

With Howard at the helm, the Forestry Board also launched a state summer camp for students — two from each county in Maryland — interested in a career in natural resources. In addition, the group picked one or two schools each year to receive some 50 saplings, planted, of course, with the help of students.

These days, the founder of Montgomery County’s Champion Tree Program is known as the county’s legendary “Big Tree Man.” But Howard asserts that, even more important than celebrating our county’s grandest trees, is sowing the seeds for more to come: “As my doormat at home says: ‘Plant a tree.’ That’s the simple message I give to people.”

Montgomery County is home to the Maryland State Champion Shumard oak, which boasts an astounding 272-inch circumference. It lives close to the Potomac River, just downstream of Lock 7 at Glen Echo in the C&O Canal National Historic Park.

Considered a lowland tree, Shumard oaks grow scattered among other hardwoods in moist, well-drained soils associated with streams and rivers. But these handsome shade trees have also been successfully grown in urban areas where air pollution, compacted soil and poor drainage are common.

To find Montgomery County’s magnificent Shumard oak, go to Lock 7, cross the towpath from the lock house and walk downstream about 1/4 mile on the path along the river. It stands just beside the footpath, has three trunks and a wide-spread base displaying the nicks and scratches of a long life. Be sure touch the bark in greeting and sit beside it for a while.

(This is an excerpt from an article written by Conservation Montgomery Vice Chair Ginny Barnes, pictured here with our county’s Shumard oak.)